The Premier Lecture (London) is a significant occasion in our annual calendar and is delivered by prestigious and well know speakers from the Christian arena.

The Premier Lecture is delivered and recorded for broadcast in front of a live audience specially invited at or around Premier Anniversary’s date. If you would like to be invited for future Premier Lecture events, please click here and fill in the form and we will contact you in due course.

For the seventh annual Premier Lecture, we heard from Bishop Graham Tomlin

Graham Tomlin is a British theologian, author and Church of England bishop. Since September 2015, he has been Bishop of Kensington, an area bishop in the Diocese of London. From 2007 until 2015, he was Dean then Principal of St Mellitus College. Bishop Tomlin was ordained in the Church of England as a deacon in 1986 and as a priest in 1987. He was curate of a church in Exeter before returning to Oxford to be chaplain (1989–1994) of Jesus College and a tutor in historical theology and evangelism at Wycliffe Hall, where he eventually became the vice-principal.

As the Bishop of Kensington, Bishop Tomlin experienced the terrible Grenfell Tragedy first-hand and gave a Christian perspective on how to rebuild community in the aftermath of tragedies like Grenfell.

For the sixth annual Premier Lecture, we heard from Alister McGrath

Alister Edgar McGrath (born 23 January 1953) is a Northern Irish theologian, priest, intellectual historian, scientist, and Christian apologist. He currently holds the Andreas Idreos Professorship in Science and Religion in the Faculty of Theology and Religion at the University of Oxford, and is Professor of Divinity at Gresham College. He was previously Professor of Theology, Ministry, and Education at King's College London and Head of the Centre for Theology, Religion and Culture, Professor of Historical Theology at the University of Oxford, and was principal of Wycliffe Hall, Oxford, until 2005. He is also an Anglican priest. Alister shared a timely message called, “Richard Dawkins vs CS Lewis on the Meaning of Life”

For the fifth annual Premier Lecture, we heard from Doctor Jane Williams

Dr Williams studied theology at Clare College in Cambridge and then worked in theological publishing and education. For three years she wrote a Sunday readings column for the Church Times, and is a visiting lecturer at King's College London. She is assistant Dean and lecturer at St Mellitus College (formerly St Paul's Theological Centre) in London. Dr Williams has been married since July 1981 to Rowan Williams, who was appointed as the 104th Archbishop of Canterbury in 2002. Dr. Williams encouraged us to think about how our Christian walk and how we engage with the society around us in a lecture entitled, 'Living as a first century Christian in twenty-first century Britain'. 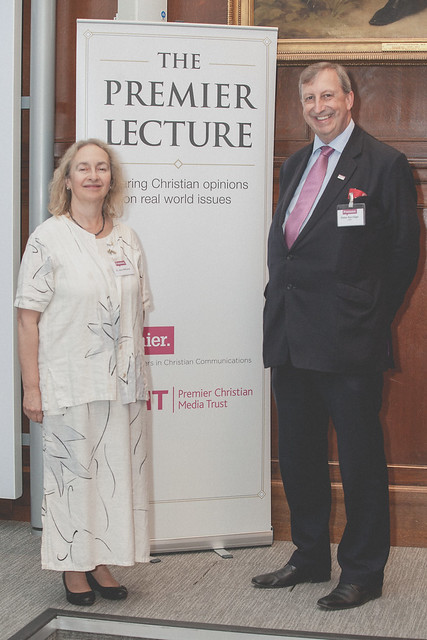 Do you sometimes feel like you need to be encouraged in your faith, especially with the challenges you face in an increasingly secular culture?

Well, it was our birthday on 10th June, and as part of our celebrations, we held the 4th annual Premier Lecture. The speaker was respected apologist and Professor of Mathematics at the University of Oxford, John Lennox, speaking on "Against the Flow” – and using the book of Daniel.

Or read the full transcript here:

“That they may all be one” - TOWARDS A NEW ECUMENICALISM

Premier is presenting the third annual Premier Lecture with the Rt. Hon Lord (Paul) Boateng on Tuesday 10th June. An interview with Lord Boateng will be broadcast on Premier Christian Radio on Sunday 15th June at 9pm.

Rt. Hon Lord (Paul) Boateng was the Chief Secretary to the Treasury in Tony Blair’s Cabinet from 2002. Born in Ghana, he came to Britain at the age of 15 when his father was imprisoned without a trial after the coup d'Etat that overthrew the government of Kwame Nkrumah. He trained as a solicitor and was elected to Parliament in1987 as MP for Brent South. In 2005 he was made British High Commissioner to South Africa and in 2010 appointed to the House of Lords as Lord Boateng of Akyem and Wembley.

Lord Boateng is an ecumenical Christian and his Lecture will explore the need and scope for a new ecumenism in relations between Christians and people of other faiths. (Foreign Office Minister, Baroness Warsi, said recently that the scale of religious persecution is growing and 100 million Christians were persecuted for their faith in 2013.)

The vision of building a society that welcomes Jesus has inspired generations of Christians. An increasingly secular Britain has no such vision and the Bible tells us that where there is no vision people perish. Bishop Chartres will explore what can be done to transform the nation and London in particular, as Christians and churches live out their faith and relationship with Jesus in every sphere of life in preparation for His return.

People throughout the world are to be invited to sign-up to and support a ‘Global Charter of Conscience’ in an international campaign to guarantee freedom of thought and religion for all. Author and social critic Dr. Os Guinness, who hopes to persuade world leaders to reaffirm their support for Article 18 of the Universal Declaration of Human Rights, presented the details of a ‘Global Charter of Conscience’ in a radio lecture, on June 28th, commissioned by Premier Christian Media Trust. It was the prelude to the launch of a new campaign website - www.declarationforfreedom.org, where everyone can learn more about, and sign-up to, the Charter.

Anyone visiting the site from the UK will find a facility which will enable them to write to their local Member of Parliament asking them to support the campaign. Premier Christian Media will also be approaching the Commons and Lords, Christian church leaders, and leaders of other faiths. World leaders will also receive from Premier the ‘Global Charter of Conscience’ as a key element of the campaign.

‘The Premier Lecture’ - ‘Soul Freedom; Living with our deepest differences in an age of expanding diversity’ - will be the first in a planned series of annual radio lectures by Premier, featuring an acknowledged expert in their field.

Martyn Eden, Premier Christian Media’s Political Editor explains; “Freedom of conscience is the very essence of a free, democratic society. If we can’t live and act on the basis of our beliefs and values, we are not free. Those who hope to privatise faith and exclude it from the public square are destroying the freedom of thought, conscience and religion proclaimed in Article 18 of the Universal Declaration of Human Rights. And that’s the key issue which Dr. Guinness will address in his lecture.”

Guinness, a Senior Fellow of the East West Institute in New York and co-founder of the Trinity Forum, seeks to persuade the United Nations to recognise his ‘Global Charter of Conscience’ as an adjunct to the Universal Declaration of Human Rights. He also plans to highlight the inadequacy of the Equality Act [2010] and how it fails to address tensions between different strands of equality policy.

Do we truly live the life? END_OF_DOCUMENT_TOKEN_TO_BE_REPLACED

Bishops push for better support for women released from prison.

The Bishop of Newcastle, together with the Bishop of Gloucester,... END_OF_DOCUMENT_TOKEN_TO_BE_REPLACED

Join us on Sunday for our Big Sunday Service.  END_OF_DOCUMENT_TOKEN_TO_BE_REPLACED

Kate Coleman is the founding director of Next Leadership and... END_OF_DOCUMENT_TOKEN_TO_BE_REPLACED

The Midlands
Most Popular

Global evangelist and founder of Christ for all Nations (CfaN)... END_OF_DOCUMENT_TOKEN_TO_BE_REPLACED

Rev Franklin Graham has spoken out against those who have supported... END_OF_DOCUMENT_TOKEN_TO_BE_REPLACED

Theresa May: Christianity is 'part of me'

Politicians should not flaunt their religion, the Home Secretary... END_OF_DOCUMENT_TOKEN_TO_BE_REPLACED

A vicar has been found dead in woodland near his home in West... END_OF_DOCUMENT_TOKEN_TO_BE_REPLACED